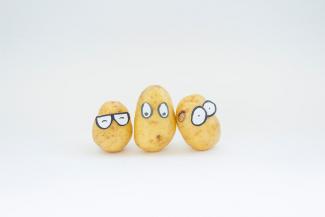 Urban Dictionary defines a couch potato as a lazy person who does nothing but sit on the couch and watch television. I really like the synonym they list -- a sofa spud.  Encouraging someone to be a couch potato goes against my core beliefs, unless of course, we are talking about investing. When it comes to your portfolio, joining the ranks of the slothful tubers may be just right.

The investment equivalent of a couch potato is a passive investor. The word passive sounds pretty lame, very spud like. But in the long-term getting just what the market returns and keeping expense low may be the best way to go.

Investors have a choice.  They can go with an active approach and try to beat the market or a passive style, where they own the investments comprising the entire index and just look to match the performance.  (Please note indexes are unmanaged and cannot be invested into directly. Past performance is no guarantee of future results.)

Wikipedia defines the two strategies in the following way:

Why not try to beat the market? Don’t we play to win?  Well this isn’t a game and beating the market is really, really hard to do. In 2014, according Morningstar, 80% to 90% of active US equity managers underperformed there benchmarks*.   Admittedly, this was a bad year for active management, but longer term numbers are not much better.   A Vanguard study shows that 76% of large cap managers underperformed their benchmarks for over the five years ending in 2013. **

In my prior life, my clients were active managers. No matter what their investment style they all had benchmarks they were measured against. Their pay was often based on their ability to beat their benchmark.

They would have sixty guys like me calling recommending ideas and updating them on their holdings. Plus they often had a team of analysts that would research companies. They would meet with senior management, suppliers, & competitors. They would travel the global visiting plants and customers. The goal is to get an advantage. Cobble together a mosaic of information that would give them an edge on the rest of the investing public.

The analysts demand a salary and all the flights must be paid for. This is one of the reasons active managers charge you more. The higher fees are deducted from investment performance making it harder to outpace the benchmark. Another challenge for active managers is that none of the information they learn can be secret.  Legally, the same information needs to be available to the rest of the investing world. And the competition is literally just that—the rest of the world.

Since they are measured against their benchmark, managers must make many decisions. If the top holding in investment manager’s benchmark is imaginary AAA at 5%, the manager must decide if they know more than the rest of the world. Do they have an edge? Do they want to buy just 5%, more, less, or any of AAA at all? Now they need to consider the second position in the benchmark, imaginary BBB. And so on.

Since stock prices move and new information becomes available they must make these decision almost every day.  Even smart people with tons or resources are going to get some right and some wrong.  The wins and loses often wash out and most of the time they end up performing about the same as the index.  You still lose versus the index because you paid a lot more for the chance at winning.

There is a great book on the merits of passive investing; The Only Guide to a Winning Investment Strategy You’ll Ever Need, by Larry Swedroe. In the book Mr. Swedroe explains passive vs. active investing with the box game.

There are nine box representing different returns. The average of 10% is in the middle box. Half of the other boxes are above 10 and half are below 10.

Now you can just sit on the couch and just take the 10% from the middle or you can play the game. Now you have to get up (ugh) and leave the room. We’ll shuffle up the boxes and cover them up.  Now you must pick one of the boxes.

When it comes to investing, don’t be afraid to embrace your inner sofa spud.  It is ok to be passive.  Be happy knowing you are paying less and will get what the market gives you.

*Is skill Dead? By Neil Constable and Matt Kadner