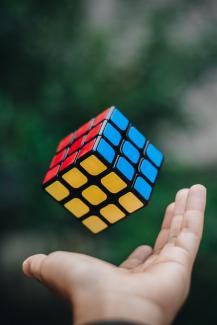 Six faces, each with nine brightly colored squares- The Rubik’s Cube!   A 3-D puzzle that was in the backpack of every kid I knew growing up.  Instead of texting, this is what we did with our hands while watching TV.

I could never figure it out.  I could get one side done, but beyond that I mostly just got frustrated.  I don’t think I was alone.  With the core mechanism and internal springs and screws the cube could be manipulated in endless ways.  Wikipedia says there are actually 42 quintillion different ways to arrange the cube.   Since people can’t get their heads around a number like that, advertisers just said “billions” of possibilities.  In 2015 the Rubik’s cube celebrated the 35th anniversary of its commercial launch.

Another milestone anniversary of a confusing puzzle occurs in 2015: Social Security will celebrate its 80th birthday.  Like the Cube, Social Security has frustrated people for years.  It too seems to have endless permutations of choices and a quintillion questions.  How do I apply?  When should I take it?  Will it run out of money before I get any?

Trouble from the start?

President Franklin Roosevelt signed the social security act into law in 1935. Coming out of the great depression this was seen as a way to give future retirees comfort in knowing something would be there for their retirement as job security was no longer a given. It was originally set up just to pay back the retiree, but tweaked in 1939 to also cover their spouse and sometimes children. From the start that seems like a red flag to me – one person pays in, but multiple people can get paid out.

There is more evidence of early trouble with the story of the very first regular recipient. Ida May Fuller, a Vermont resident, paid into social security for three years.   The accumulated taxes on her salary during that time totaled $24.54. Ida collected her first monthly check in 1940 at age 65. It was for $22.54.  She lived to 100!  She collected a total of $22,888.92!

Longevity was a friend of Ida May’s, but it is a foe to the social security system.  In 1930 the life expectancy for a male was 58 and 62 for a female. In 2015 those numbers are 76 and 81, respectively.   People are living longer and collecting for a longer time period.  The ratio of workers paying into the system versus those collecting was 5 to 1 in 1960 and dropped to around 3 to 1 this year.  It is expected to fall to just 2 to 1 in 2035.

The social security administration looks at your highest 35 earning years and applies a formula to determine your Primary Insurance Amount (PIA). You can collect your full PIA if you retire at your Full Retirement Age (FRA).  Originally the FRA was 65. That number was increased in 1983 to 66 and a few months for those born between 1943-1959, and to 67 for those born after 1960.

While your FRA may be 67, you can start claiming reduced retirement benefits as early as 62. If you take benefits early your payout is permanently reduced. It does not step back to the original PIA at age 67.  For someone with a FRA of 67, taking early payments at 62 will reduce your monthly payment by 30%.

You also have an option of delaying payments past your FRA. Currently you can delay payment up to age 70. For those born after 1943, each year you delay payment beyond your FRA you will realize an 8% annual increase.

For the majority of the time the main goal of financial planning is to replace income in retirement. Social Security can be a big part of that retirement income. Like most pensions or annuities it is a guaranteed “brick” of income that you can’t outlive.   A nice aspect of social security is that your payment can increase. If the Consumer Price Index for Urban Wage Earners and Clerical Workers (CPI-W) prepared by the Bureau of Labor Statistics (BLS) shows an increase, a Cost of Living Adjustment (COLA) is made. This helps to offset the effects of inflation.

The hope from a planning standpoint is that these guaranteed “bricks”- social security, a possible pension, or annuity would pay for “needs” in retirement.   Someone’s ability to achieve their “wants” will be determined by their savings and investment performance.  If someone is looking to replace a high income it will be hard to get all the needs with guaranteed income streams and the outside portfolio will become more important.

A spouse is entitled to their own retirement benefit or half of their spouse’s benefit, whichever is higher. This assumes that you have reached FRA.

Where do we go from here?

Unfortunately, when working with younger clients I try not to rely too heavily on a social security benefit in retirement planning. I want to be on the conservative side for planning purposes.  Depending on what study you read, the social security trust fund is set to run out of money, or at least not be able to pay full benefits, somewhere around 2033 to 2036.

I fail to see why politicians are afraid to address the situation. I realize people close to retirement are nervous about having the finish line moved, but you can grandfather in those over 55 to any sort of change. As someone who is expecting to get to FRA in 2039 I want to see something done. With life expectancies continuing to increase, moving out the FRA to say 70, seems like a plausible solution. I also believe a higher limit on the income taxed or no limit at all would do wonders to stabilize the situation. I would prefer these sorts of adjustments over means testing where those who were lifelong savers could potentially not qualify for any sort of retirement benefit.

As you can see by the length of this note (and I didn’t even touch disability or survivor benefits) social security is a complex issue. Like the Rubik’s Cube there many moving parts. My hope is with some education, planning, and political action we can solve the puzzle and limit people’s frustration.